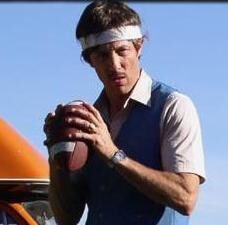 Rico Dynamite is Napoleon and Kip's uncle. He first appears in the film to take care of Napoleon and Kip after their grandma breaks her coccyx at the sand dunes. He is portrayed by Jon Gries.

When Rico was in high school, he was a popular football star with dreams of going to the NFL. He dropped the winning pass for the big game and lost his popularity soon after. He dropped out of high school, abandoned his dreams, and lived in his orange Santana ever since. Now, he spends his time filming himself tossing footballs.

Many years later after Napoleon and Kip's grandma breaks her coccyx, their grandma calls Uncle Rico to take care of both of them while she is in the hospital. While Kip is content and doesn't mind that his uncle stays, Napoleon however despises it. Rico shows one of his football tapes to his two nephews which Kip likes but Napoleon criticizes it by calling it the worst video ever made. Offended by this, Rico orders Napoleon to leave the room.

Angered, Napoleon finds Uncle Rico and chucks a fruit at his Santana. Rico gets startled, stops his van, and charges out to confront him. Napoleon, however, had another grapefruit as he hits Rico in the thigh and begins to run away. Rico quickly catches up to his nephew, tackles him to the grass, and puts him in a headlock. He angrily asks his nephew why the heck he is throwing crap at his van. Napoleon angrily answers back by saying that everyone in school hates him because of the papers he sent out. Without acknowledgement of Napoleon’s reply, Rico demands him to clean his van. Napoleon, having no intention in doing so, elbows him in the stomach, causing Rico to lose his grip and release Napoleon, which allows him to escape.

Later, Rico is filming yet another one of his football tapes in the Dynamite front yard. He and his nephew get in a heated argument when Napoleon orders him to leave. He is also beat up by Rex, after Rico was getting a little too close to his wife while trying to offer her his breast enhancement product. At the end of the movie, he is seen with a broken arm and reunites with his ex girlfriend.

He could have gone on to win the high school football championships and gone to the University of Idaho to win the BCS Championship.

Retrieved from "https://napoleondynamite.fandom.com/wiki/Rico_Dynamite?oldid=6220"
Community content is available under CC-BY-SA unless otherwise noted.