View source
watch 01:36
We're Getting Mutants in the MCU - The Loop
Do you like this video?
Play Sound
Pedro Sanchez 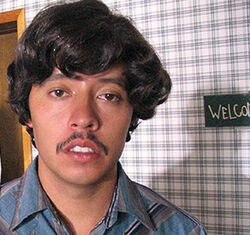 Pedro Sanchez is Napoleon Dynamite's best friend. With Napoleon's help, he runs for class president, and wins. He is portrayed by Efren Ramirez.

In Peluca, there are 2 characters named Gail and Pedro. Gail is a shy, quiet boy who shaved his head, but the Pedro in Peluca is nothing like the Pedro in Napoleon Dynamite. This Pedro stands up to bullies and is more outspoken. The Pedro from Napoleon Dynamite is probably based off of Gail, but uses Pedro's name, as he is an exchange student from Mexico, and Gail is more of an English name.﻿

Pedro is a shy, quiet type of person who never once gets angry in the movie. This could be because of the fact that he is an exchange student, and doesn't know American culture that well. He speaks with a quiet, Spanish accent, and rarely ever smiles or shows happiness, only at the end of the movie a few times. Pedro seems to enjoy American food as he started by eating a corn dog. He somehow gets hot but he tries to drink water and take a bath but he realizes that it's his hair that made him so hot, so he shaves it all off and then puts on a hoodie and then tightens it because he doesn't want anyone to see it. Then Napoleon and Deb pitch in and give him a wig to cover up his head.

Pedro is an exchange student from Juarez, Mexico, and he becomes friends with Napoleon when Napoleon helps him find his locker. Napoleon becomes his friend because he is impressed by his mustache and his bicycle. Pedro gives Summer Wheatley a cake as a sign of his love and so she would go with him to the upcoming school dance, but she says no. Pedro then asks Deb, and she says yes, much to Napoleon's dismay. After the dance, Pedro sees a sign above the water fountain for the upcoming class presidency, and decides to run for it.

To support his campaign, they do numerous things, like have a piñata to hit, protection from bullies by Pedro's cousins, giving out boondoggle key chains made by Deb, and even more. He shaves his head though, which he feels could hurt his chance at presidency, but Deb gives him a wig to wear. When the final speech comes, he doesn't do a good job, because he has no idea what to do for a skit. Fortunately, Napoleon has been practicing dance moves, and he does a dance number for Pedro. The dance number gives Napoleon and Pedro a standing ovation, and Pedro wins the class presidency. He celebrates by having a party with his family. Two months later, he also attends Kip and LaFawnduh's wedding, which probably means him and Napoleon stayed good friends.

"Hello. I don't have much to say. But I think it would be good to have some holy santos brought to the high school to guard the hallway and to bring us good luck. El Santo NiÃ±o de Atocha is a good one. My Aunt Concha has seen him. And...we have a great F.F.A. schedule lined up-- and I'd like to see more of that. If you vote for me, all of your wildest dreams will come true. Thank you."
—Pedro Sanchez

"Just draw a picture of the girl you want to take out,

and give it to her for, like, a gift or something. "

Community content is available under CC-BY-SA unless otherwise noted.
Advertisement