Edit
watch 01:36
We're Getting Mutants in the MCU - The Loop
Do you like this video?
Play Sound
Kip Dynamite 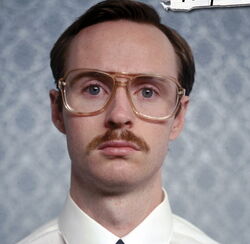 Kipland Ronald Dynamite is Napoleon Dynamite's older brother, and has a prominent role in the movie. He is portrayed by Aaron Ruell.

Kip is soft spoken gentle man who loves technology. What he wants to be is in contrast to what he is. He is training to be a cage fighter and seeks out training at the Rex Kwando martial arts DOJO after seeing an ad on television. He is a ladies man on the internet where he chats with "hot babes all day long." Despite him not being any of the things he aspires too, he is a lovable character and eventually marries Lafawnduh who, oddly enough, isn't in the TV series.

Kip is 32 years old, but he still lives with his grandmother, along with his brother, in Preston, Idaho. Before Uncle Rico came along, he would usually stay inside the house chatting with people, or "babes" as he calls them, on the computer. He meets LaFawnduh and thinks she is his soulmate.

When Uncle Rico started living with them to look after them on request by Grandma, Kip started hanging out with him. They chatted like old friends, talking about relationships, Uncle Rico's football career, time travel, and they even started a business together. Kip became a door to door salesman with Uncle Rico, selling 24 piece dining sets to households, while adding extras like miniature ships and bowls.

Kip still chatted online any chance he could, and during this chatting he met LaFawnduh Lucas, a woman from Detroit. Kip used his share of the money in the salesman business to bring her to Preston, so they could meet up. Prior to LaFawnduh arriving, the relationship caused Kip to slack off in the business, and it is assumed he quit when she came.

When LaFawnduh came, he changed a lot. He started dressing, talking, and acting differently. He was a more urban, gangster person. For the remainder of the movie, he hung out with her, and eventually he left Preston to live with her in Detroit for a while.

Kip has a very positive relationship with Uncle Rico. He is happy when he finds out Uncle Rico is coming to look after them, he enjoys Uncle Rico's movies, and finds it funny when Uncle Rico hits Napoleon in the face with steak. Uncle Rico returns this positive vibe, by starting up a business with him.

Kip has a romantic relationship with LaFawnduh, and this relationship at first started in online chatrooms, but it soon grew to be even bigger when Kip raised enough money to bring her to Preston. They were in love, no matter the differences they had, and they got married one year after the events of the movie. In terms of the character's growth, LaFawnduh becomes instrumental. This is especially evident when he defends her honor from Rico who mentions he should sell her the products upon her arrival, or when he gives Napoleon "goodbye advice" before leaving with her. During the wedding Kip sings his outlandish song "Always and Forever" to LaFawnduh but is interrupted by Napoleon riding on a horse. Kip and LaFawnduh later use that horse to ride into the distance.

"I've been out making some sweet moolah with Uncle Rico."
—Kip Dynamite

"Lafawnduh is the best thing that has ever happened to me. I'm 100% positive she's my soul mate. Don't worry Napoleon, I'm sure there's a babe out there for you too. Peace out."
—Kip Dynamite

"Napoleon, don't be jealous that I've been chatting online with babes, all day."
—Kip Dynamite

"You were born a loser, you will die a loser, and I will do interpretive jazz on your grave." - Kip Dynamite *citation needed

"I'm just getting kinda TO'd. I mean, she hasn't even sent me a full body shot yet."
—Kip Dynamite

"Napoleon, let go of me! I think you're bruising my neck meat!"
—Kip Dynamite

"Your mom goes to college!" 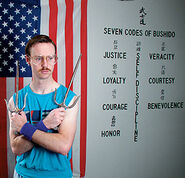 Kip in his "street" clothes 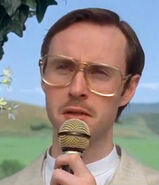 Kip singing at his wedding 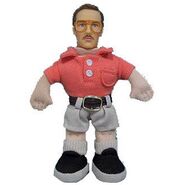